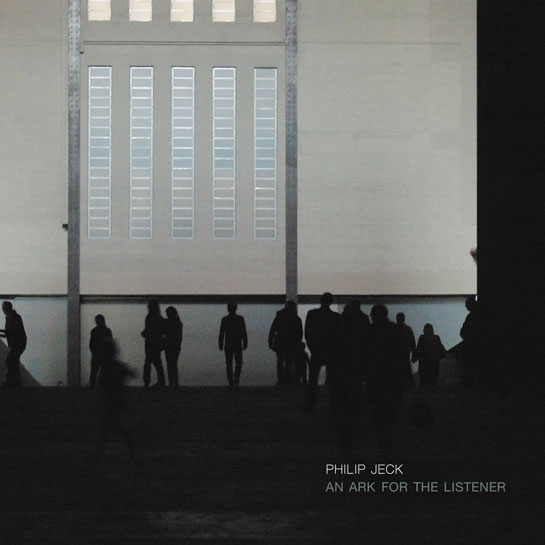 Philip Jeck works with old records and record players salvaged from junk shops turning them to his own purposes. He really does play them as musical instruments, creating an intensely personal language that evolves with each added part of a record. Philip Jeck makes geniunely moving and transfixing music, where we hear the art not the gimmick.
Philip Jeck writes: “A version of “An Ark For The Listener” was first performed at Kings Place London on 24/02/2010. It is a meditation on verse 33 of “The Wreck of the Deutschland”, Gerard Manley Hopkins poem about the drowning on December 7th 1875 of five Franciscan nuns exiled from Germany. This CD version was recorded at home in Liverpool and used extracts from live performances over the last 12 months. The “coda:” tracks are remixes of 2 pieces from “Suite: Live in Liverpool”. “Chime, Chime (Re-rung)” was originally made for Musicworks magazine (#104, Summer 09) and “All That’s Allowed (Released)” is previously unreleased. All tracks were made using Fidelity record-players, Casio SK1 keyboards, Sony mini-disc recorders, Behringer mixers, Ibanez bass guitar, Boss delay pedal and Zoom bass effects pedal.”

An Ark… is Jeck’s 6th solo album for touch since ‘Loopholes’ in 1995. The Wire reckoned it was ‘Stoke’ (Touch, 2002) which ‘made him great, but his body of work and his achingly brilliant live sets are rapidly defining him as one of our best artists, and his recent award from The Paul Hamlyn Foundation confirms him as such.

The cover shows Mirosław Bałka’s installation at the Tate Modern’s Turbine Hall, “How It Is”, April 2010.

Philip Jeck studied visual art at Dartington College of Arts. He started working with record players and electronics in the early ’80’s and has made soundtracks and toured with many dance and theatre companies as we as well as his solo concert work. His best known work “Vinyl Requiem” (with Lol Sargent): a performance for 180 ’50’s/’60’s record players won Time Out Performance Award for 1993. He has also over the last few years returned to visual art making installations using from 6 to 80 record players including “Off The Record” for Sonic Boom at The Hayward Gallery, London [2000). In 2010 he won one of The Paul Hamlyn Foundation Awards for Composition.

Buy Philip Jeck “An Ark for the Listener” at Bandcamp